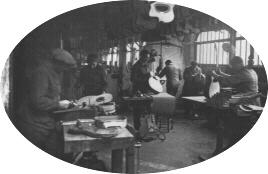 During the 1930's there were many Italian Luthier's settling in France. One who was to become the most enduring was Mario Maccaferri who was born in 1900. An accomplished guitarist himself, he also had an interest in the making of many stringed instruments which he had learned as a young man as an apprentice to the famous Italian luthier Luigi Mozzani which he took up in 1911. During this period he took an interest in playing the classical guitar and at the age of sixteen had gained a high reputation of being a concert guitarist.

Even though he had a career as a guitarist he maintained his interest in the technical side of guitar construction and engineering as a whole as technical advisor to the Mozzani workshops. In 1926 he received the highest possible diploma possible from the Academy of Music in Siena.

In 1923 he left Mozzani and embarked on a European tour. During this period he advertised as the maker of all stringed instruments. In 1926 he settled in London as a teacher and made a comfortable living as such. While here he began to develop the early prototypes of the Maccaferri guitars. He took the first prototypes to Ben and Lew Davis who in turn put him onto Henri Selmer in Paris who was so impressed that he gave him the contract of setting up a factory in Mante le Ville to build what were to become the Maccaferri Guitars by Selmer of Paris.

Within a few years these guitars had become popular with Dance Bands and Jazz Groups across Europe. The most famous of these being Django Reinhardt and The Hot Club de France.

In 1934 Maccaferri left Selmer and this is the period most famous for Selmer as they introduced the Modele Jazz which incorporated the distinctive small oval hole. Which was used by Django, though not exclusively, until his death. His brother Joseph played the earlier D hole, (grand bouche or big mouth), in the Quintet which is still considered today as the rhythm guitar.

Not many originals were made of this style perhaps only 1,000 between 1932 and 1952 and only half being the Modele Jazz. Rare as rocking horse shit as they say. Recently I heard of one bought by a Belgian Gypsy for Ł4000 it had a neck shaped like a bannana and had to be rebuilt at great expense by Doug Kyle.

The Modele Jazz had a cutaway at the 15th fret incorporated the compensated floating bridge and two glued on moustache bridge extensions made from ebony. A metal tailpiece accommodated either ball or loop end strings, and a radiused ebony fingerboard extending over the soundhole providing a 24th fret under the high E string.

The Oval hole model with the bouche oval orpetite rosace only appeared after Maccaferri had left the company in 1934. There were a few odd ball guitars made at this point but settled down eventually to build the Modele Jazz until their closure in 1952.

Further reading available on his affair with making Plastic Instruments.
Also the fantastic book by Francois Charle "The Story of Selmer Maccaferri Guitars"

Back to Swing Page
Back to articles