The History of Django

Below is Djangos birth certificate.

Jean Reinhardt "Django" was born to Gypsy parents on the 24th January in 1910 at Liberchiesin Belgium. As a child he travelled throughout France, Italy and North Africa. At the age of ten the tribe took to a more permanent lifestyle at the Parisian port de Choisy. It is first reported that he accompanied his father on violin banjo and guitar at fętes and festivals at a young age.

He was an accomplished musician working in Paris when at the age of eighteen the caravan in which he was sleeping was ravaged by fire. Apparently his wife had filled the caravan that day with bunches of dried flowers. During the night Django got up and knocked a candle over setting the flowers ablaze. His left leg, and the third and forth digits on his left hand were terribly burnt. The doctors wanted to amputate the leg as it was so badly damaged, but Django refused. This was the end, thought by his contemporaries, to a promising career.

Due to the foresight of Djangos doctor, he recommended that Django be given a guitar as therapy. Django rose to the challenge and persevered, giving rise to the style of playing that was eventually to create a storm the world over.

In 1930 he first heard recordings of Duke Ellington and Louis Armstrong. This was a revelation to him and sent him onto the path of swing jazz. In 1934 he formed "The Quintet Hot Club de France" with the violinist Stephan Grapelli, his brother Joseph and R. Chaput on guitar and L. Vola on bass. It was at this point that he became known to and started his influence on guitarists around the world through his many recordings. Many American musicians would travel to Paris to play with him, Coleman Hawkins, Benny Carter Rex Steward to name but a few. 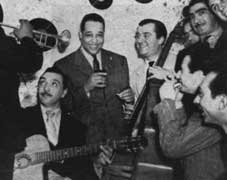 The Quintet was touring England when the outbreak of the second world war was declared. Django returned to Paris immediately, leaving his wife and guitar in his haste, while Stephan remained in England for the duration. Undeterred the Quintet was reformed with Hubert Rostaing on clarinet replacing Stephan's violin

During the occupation by the German forces, Django played on all over Europe. Immune to the sufferings endured by his kinfolk who were being harried by the Nazi Invaders due to the help of a Nazi officer Nazi Oberlieutenant Dietrich Schultz-Kohn. Many were sent to the death camps. He kept his head down when he had to and earned enough to keep body and soul together.

At one point Django tried to escape to the free world, but apparently got lost and appeared back again two days later. He was also well known for sending his wife out to ensure that all was safe after the "all clear" had been sounded. 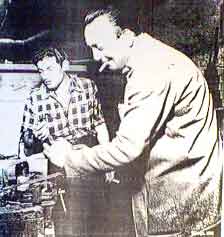 Django was known to be a great spender of money. No sooner had he earnt his wages, or taken an advance on gigs yet to be played, the money would be gone. Usually to the benefit of a local bookie. Django was a fine billiard player, once again displaying his amazing hand co-ordination. Though he would often give so many points away as a handicap at the start of the game he invariably lost. 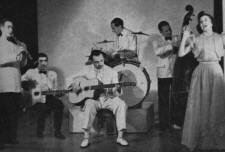 Django married Sophie Ziegler in 1943 and there son Babik, who went on to become a fine composer and player, was born in 1944.

After the war he rejoined with Stephan in England and they both returned to Paris. to prepare for an American tour organised by Duke Ellington. This tour culminated in a performance with Ellington's orchestra at the Carnegie hall.

Dozens of recordings were made at this time, both in France and America making his unique style available to the world. 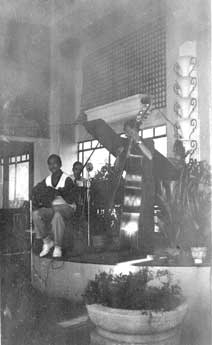 In 1951 he set aside the guitar and effectively retired from the music scene. Taking up residence in the small village of Samois sur Seine near Fontainebleau he spent his time fishing and painting. It is believed that he thought his music was misunderstood and therefore wanted nothing to do with the music business. He did however make some recordings right up to the month of his death, some riding on the wave of bop, others hauntingly beautiful.

On the 16th May 1953 he suffered a massive brain hemmoridge and was pronounced dead on arrival at the hospital in Fontainebleau. 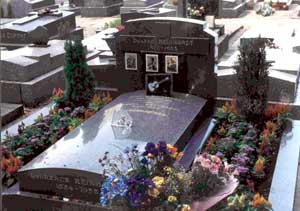 Django's influence cannot be measured, for his unique style has been absorbed into the music of the West. But his original compositions and his versions of the classic jazz numbers written by the black American musicians of the thirties and forties live on and are celebrated every year at festivals throughout Europe. Culminating at Samois sur Seine in a three day festival, originally started by the Gypsy community, later taken on by the local council. Here can be found musicians from around the world emulating his style, some good some really bad but played none better than by the European Gypsies who were born into the culture of his music.

Many pay their respects at the grave of Django in the cemetery at Samois. Note the guitar picks at the base of the grave left by respectful visitors.