The Day I met Django 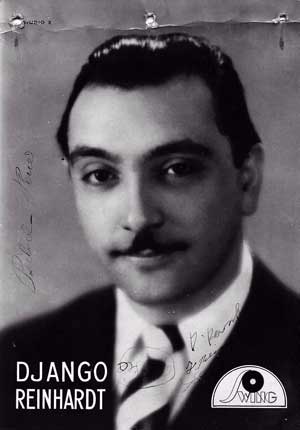 I went to Deauville on holiday. I was eighteen. In those days tea dances were in, so every afternoon I went to the Yacht Club tea dance, (It was run by George Carpontiea the French ex boxing champ), there was two bands, one was Maurice Winnick's dance band, and the other a small Gypsy band.

In the Gypsy band was a guitarist who played in the style of Django. I was not much good at French, but I managed to tell him he played like Django, well he was delighted to hear it and told me he was Djangos brother Joseph.As I saw him every day we got quite friendly and he told me that the Hot Club was playing in London at the "State Cinema" Kilburn, London in a few months time and if I came back stage to see him he would introduce me to Django. Well that could not be missed could it! So when the time came I took my young brother (who played very well in those days) and a friend to see the show.

After the show we went back stage to see if Joseph remembered me, well he did and was very pleased to see me, he introduced me to Django who was polite but not very interested at first, then I saw Djangos Guitar laying there. I thought I would love to be able to say I have played Djangos Guitar so I asked him if I could and he said sure. I banged out a few chords in the hot club style and his whole attitude changed and he became very friendly. I asked him if he would like to come for a drink in the pub and he said yes, then he said to the rest of the hot club in French of course that we were all going for a drink, they all came except Stéphane Grappelly. On the way to the pub, the friend I came with said, lets not go to the pub lets go home for a drink, and Django said OK.

We got back to my friends house, he had a great bar in his house, and we had a few drinks, I then said to Django If I got my guitars would he play , he said yes if I played with him, so off I went to get my guitars, I lived very near my friends house. I had 2 Gibsons one I bought from Len Williams the father of John Williams for Ł5, the other was a FDH Special.

What a thrill to play for Django. My young brother was a much better player than I was and he had taken the solo of Limehouse Blues, off the Django record, and when he heard my brother play he was delighted . He was really very modest and never realised he had such a big following.

After a bit of playing, we stopped, then started to play some gramophone records, one was of Chick Web playing undecided sung by Ella Fitzgerald. He loved it and said he would record it . He said he needed a singer for it, so we recommended the singer from the Romany Band, a girl called Beryel Davis.

After A few more drinks, we took them all back to their Hotel said good night and I thought that would be the end of it , but a couple of days later Django rang me and invited us all to the Night Club that the Hot Club was playing at, called The "Nut House" run by All Burnett. Well you can imagine how exited I was a kid of eighteen then, invited by the great Django.

We went to the Club but All Burnette would not let us in , as he did not believe we had been invited by Django however I would not go, I persuaded him to check and it took some doing, but at last he did, and Django came out and told him we were his guests. He had a table reserved for us right in the front, we watched the show danced a bit with a few of the birds that were there, then at about 4.30PM we all went to Lyons Corner House for breakfast the whole hot club but not Grappely. I think he was a bit too posh for us in those days .

Django paid the bill for everybody, I tried to pay him back but he would not hear of it. Well thats the end of the story .

A short while after that I was in the army and actually landed on the beach in Normandy in full kit, and my guitar, but that is another story.

Many thanks to Albert for jotting down this great memory for us. Who I've just calculated is now around 83 years young.(ed)